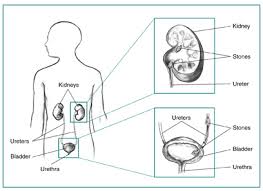 Kidney stones are small masses consisting of urine components that crystalize under certain conditions.  If the crystals remain small enough they will pass down the ureters into the bladder and are removed unnoticed during urination.

The different types of kidney stones include:

Calcium Oxalate Stones:  Approximately 85% of all kidney stones are calcium oxalate based kidney stones.  The majority of oxalate is produced in our liver as a part of normal metabolic functions, while the remaining oxalate comes from our diet.  Foods that are heavy in oxalates are green leafy vegetables (such as spinach), coffee, chocolate, and nuts.  Oxalate ingested through the food we eat reaches the  blood stream by being taken up in the small intestine.  Under normal circumstances the kidneys maintain the amounts of calcium and oxalate at levels that prevent them from interacting, however, when the levels of free calcium and oxalate are too high they will combine in the kidney to produce calcium oxalate crystals that do not dissolve in the urine and therefore stay in the kidney.  High levels of oxalate may be caused by oxalate rich diets or in very rare cases a genetic disease that causes the liver to continuously produce oxalate. 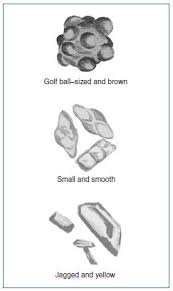 Uric Acid Stones:  Uric acid kidney stones form when the amount of uric acid or other acids is too high in the urine, causing uric acid crystals to form.  This may be caused by deficiencies in the re-absorption of acids in the kidneys.

Struvite (Infection) Stones:  These stones consist of magnesium, ammonium and phosphate.  This is the only type of kidney stone that is not due to metabolic problems. Instead they are a result of urinary tract infections caused by bacteria that are able to break down a major waste product in urine called urea.  The most common culprit is Proteus mirabilis, which splits urea into ammonia, decreasing the acidity of the urine (pH) and producing an environment that favours the formation of struvite stones.

Cystine Stones:  They are caused by a genetic defect in proteins responsible for uptake of cystine in the intestine and the kidneys. This results in high levels of cystine in the urine which then goes on to form cystine stones.

Calcium Phosphate Stones:  These stones are associated with hyperparathyroidism.