We are proud of the following achievements so far:

The Canadian Institute for Health Research New Investigator Award, Dr. Dirk Lange (2016): Congrats to Dr. Dirk Lange for receiving this highly competitive award for his project on The Development of Novel Therapeutic and Preventative Strategies for Kidney Stone Disease! This award is presented to outstanding new investigators giving them the opportunity to develop and demonstrate their independence in initiating and conducting health research. For more information click here.

First Prize Early Career Investigator Showcase, Dr. Dirk Lange (2015):  Dr. Dirk Lange was chosen by the Urology Care Foundation to present his work entitled “Accelerating Recovery of Normal Ureteral Function Following Obstructive Uropathy” as part of the Early Career Investigator Showcase. This showcase is designed for young investigators to present their work to a large audience of experts and peers. Awardees are chosen by an expertise panel of judges and Dr. Lange was awarded First Prize. 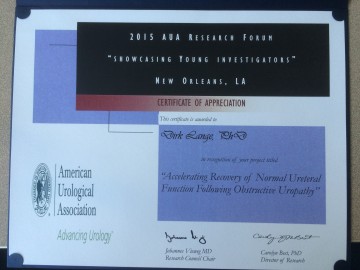 Urology Care Foundation Outstanding Research Scholar Award, Dr. Dirk Lange (2015): In 2013 Dr. Lange was the recipient of the prestigious Joseph Segura Scholarship in Endourology and Stone Management, which is given to promising young investigators whose research has the potential to have significant impact on the treatment of kidney stone disease. This award is handed out through the Urology Care Foundation, which is the official foundation of the American Urological Association. Based on their accomplishments throughout the tenure of the scholarship, one graduating scholar is chosen as the Outstanding Graduating Scholar. We are proud that this years award winner is our own Dr. Dirk Lange. 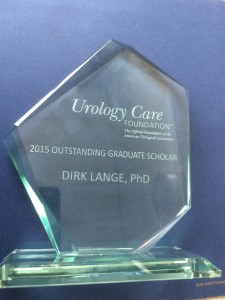 CUA Astellas Research Grant, Drs. Lange & Chew (2014): The CUA (Canadian Urological Association) Astellas Research Grant Program supports scientific discovery and innovation in urology in Canada. The objective of the CUA Astellas Research Grant Program is to support peer-reviewed research that promotes excellence in urological research with the ultimate goal of improving patient care. Drs. Lange and Chew were awarded this grant to study the role of intestinal bacteria in re-current kidney stone disease. For more information on this research program headed by Dr. Lange, please visit the Current Studies section of this site.

Segura Scholarship, Dr. Dirk Lange (2013): The Segura Scholarship is a Society of Endourology designation named after the late Dr. Joseph Segura who made significant contributions in the field of Endourology. The American Urologic Association Research Scholar Program recognizes up and coming clinicians and basic science researchers who are expected to make significant contributions to the field of Urology in the future.

CUA Astellas Award, Drs. Chew and Lange (2012):  Drs. Chew and Lange received the CUA-Astellas Award for a laboratory research project to gain understanding of the signalling pathways in the kidney and ureter, in order to build a better and more comfortable stent.This award will help to improve the healthcare of many Canadians and also advance our knowledge of urology, particularly in the area of kidney stone disease treatment.