The International Urology Society has been in existence since 1907 and its mission is to enable urologists in all nations, through international cooperation in education and research, to apply the highest standards of urological care to their patients. The annual SIU Congresses give members and colleagues from all nations a forum in which to meet and discuss professional topics in a spirit of collegiality and common purpose.

In 2013 the congress took place in Vancouver. The meeting hosts were Dr. Ben Chew with Dr. Peter Black from the Urology department at VGH. It was a very successful meeting and we are pleased that another large international meeting will be hosted in Vancouver in 2017, the World Congress of Endourology.

Drs. Ben Chew and Dirk Lange were invited to speak at the Engineering and Urology Society Meeting held in conjugation with the annual Conference of the American Urological Association in San Diego, California, USA. In addition, Dr. Lange was also invited to give a podium presentation as part of the conference material. At this session, Dr. Lange presented on the novel findings on understanding the signals that drive ureteral peristalsis and how they are affected when a ureteral stent is placed. The identification of such signals is a big step towards preventing stent-induced patient discomfort and pain as well as urine flow from the kidneys to the bladder after surgical procedures to remove kidney stones.

Dr. Dirk Lange was awarded the prestigious, Segura Scholarship in Endourology and Stone Disease, a Urology Care Foundation sponsored fellowship (previously: American Foundation for Urologic Diseases – AFUD). The Segura Scholarship is a Society of Endourology designation named after the  late Dr. Joseph Segura who made significant contributions in the field of Endourology. The American Urologic Association Research Scholar Program recognizes up and coming clinicians and basic science researchers who are expected to make significant contributions to the field of Urology in the future. Congratulations to Dr. Lange for this excellent achievement!

Dr. Ben Chew with co-applicant Dr. Dirk Lange have received the CUA-Astellas Award for a laboratory research project to gain understanding of the signalling pathways in the kidney and ureter, in order to build a better and more comfortable stent.This award will help to improve the healthcare of many Canadians and also advance our knowledge of urology, particularly in the area of kidney stone disease treatment. 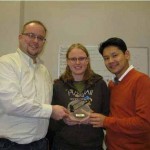 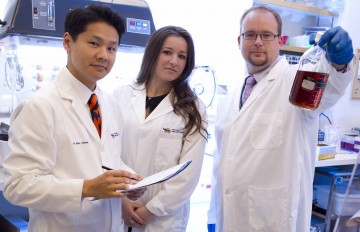